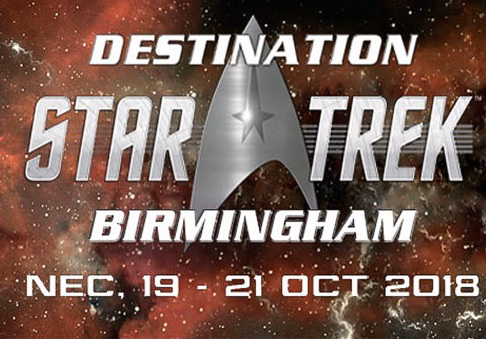 Weirdly after all my con years I have never been to a Star Trek event . People who have known me years were surprised I was such a big trek fan as it’s not a series I talk about much. My teenage years were full on Trek . It was the golden era tbh . Next Gen. had been going strong as I grew up and as I hit secondary school ds9 and voyager began and it all ended as I left education with enterprise . I remember buying all the new releases on video and having the full collections and over the years I have met the majority of all the main casts of all the series so I haven’t really needed to go to a Star Trek event.


I have always been put off attending destination Star Trek as the previous reviews have not been exactly Steller . With high prices, busy lines and repeat guests but this year I was drawn in by the Ferengi in costume and make up shoots. The added pretty much full discovery cast and especially DOUG JONES helped seal the deal for me.


My inner trek geek was really excited for this event and I had booked a record breaking ( for me anyway) 15 photo shoots !!! ( my friend Mel who attended with me is a bad influence )


So that’s the pre- event ramble now on to the event itself.
Saturday:
We arrived about half hour before opening and there was a reasonable sized queue which did grow quite big by the time of opening.


The layout for the event was fairly simple. Guest all along one wall stalls opposite. The photo rooms were quite close so wasn’t too hard to run between them .


The 3 halls were set apart At different corners - 2 were fairly open to the public the main one was sealed off behind a large curtain. I didn’t see many panels over the weekend half because I was really busy Saturday with photoshoots and also because many were paid for and I don’t have the money or the inclination to pay for panels.


The sets and the bridges were closed nearby to the food hall.


There were several advertised “selfie points “ tho many of the photos used to advertise this were not selfies but people having their photos actually taken - having walked around the venue all I found was a cloth display of space ships - did look nice - and a transporter. Later I found an alien creature from the original series but it didn’t have a sign so I didn’t realise it was a selfie point . Tbh it was a bit of a let down . As all the other sets etc were all to pay for and were £15 per person which is too much in my opinion


There were two smaller sections one with props - but no photos allowed. They had some nice items especially the costumes and the next hall had a set of props and costumes from the discovery mirror universe . They did look nice and surprising how small some of the actors are.


The photo sessions ran quiet well, small delays now and again but no real issues. For once I am actually happy with all my photos. The photographers and lighting all were good. I didn’t get many autographs at this event so many of my interactions with the guests were in the photo sessions. So here are my quick reviews of the guests.


Soniqua Martin Green- she was smaller than I expected. She was really warm and sweet.


Wilson Cruz - I was the last to get his shoot and he was fun . As I was wearing my red shirt tshirt he joked about death not being permanent in Trek and we agreed at leas my he went out in style but looking forward to seeing how he returns in season 2.


I also got cirroc lofton but as I got his auto I’ll mention him them .


The ferengi make up shoots


Max Grodenchic ( Rom) the make up was ok. There is something about it that isn’t right - I think it’s the nose . He was still fun and clearly enjoying it .


Then came the main event -
Armin Shimmerman (quark) I was blown away with this make up . It was the original screen used prosthetics and the original make up team. It looked amazing . It looked natural and real and I am still amazed .


I only met a few guests for autos this year and most were for my friend as I had limited funds and I have met many before .


Cirroc Loften- he was the one guest I really needed to get , he is the last main cast autograph I needed for my DS9 collection . The last time he was over was my first ever signing event at LFCC 1 all those years ago . He was friendly and engaging. Talking about his characters journey and he was lucky to not to be remembered as the annoying child character that can happen on sci-fi. Nice autos and a free selfie yay :) he was also lovely enough to do a happy birthday video for a friend


Mary Chieffo- I was first taken aback how pretty she was. How even tho she wears a lot of prosthetics , that you can still see her features on screen. She was very warm and engaging . A real people person and another free selfie


Ken Mitchell - was a really quick chat about his previous work on an understated show called Jericho and that how it was made just before social media boomed , that it was made later it would have done better.
Another free selfie :)


Doug Jones : I finally met Doug Jones !!! I have tried many years to meet Doug he always cancels last minute. So I was over joyed to b on his queue and have him in my eye line.
Boy did he not disappoint . We spoke about his work on the shape of the water and my fav film pans labyrinth. How his costume work is amazing and how each character feels so real and you forget it’s all make up and prosthetics. He signed my items and he gave me he biggest cuddle and started kissing my cheek and beard affectionately. After the free selfie I managed to get one of us recreating the pale man from pans labyrinth.


Nana visitor - I have met Nana many times and she is a delight to talk to. The man in front asked for a selfie but she said she had been told she wasn’t allowed as it was stealing from those who has paid for a photo shoot - but she let him take a sneaky one anyway but shhhh don’t tell anyone. We spoke about how a reunion episode would be good and she recorded a happy birthday video for a friend


Rene Auberjonis - again I have met him many times. He sadly is starting to show his age and this responses were slower then I have seen him before but always a pleasant meet. He was charging £20 for an Odo bucket sketch and a selfie with all money going to charity.


My final auto of the day was chase masterson was only a brief meet as had met her before but she is still as bubbly as ever. Selling tshirts and cds for Charity . She was also selling selfies for £10


I only managed to see part of the ferengi family costume panel it was hard to hear - think was partly Armins fake teeth and partly the sound system of the open stage .


Sunday
This was a quieter day for me as I only had a few things to get . But annoyingly my last photo shoot was at the end of the day.


But although it was a quieter day on the Sunday both attendance and things to do, It did also feel a lot harder to get stuff done .


Photo shoots felt more delayed and auto lines were slower . There were less guests in attendance as most of the discovery guests and Kate mulgrew left at lunch time . Any time I walked past the auto section always appeared empty of guests but many steady lines .


I had one issue with the steward naming one of the lines . They didn’t seem to know how virtual tickets worked and there were more people queuing to join the queue then people actually queuing . But luckily it was resolved quickly


Ira Behr - my first meet of the day . He has no queue and so I had hoped for some chat but he didn’t want to engage . He barely looked up from signing the autograph. But he did me a free selfie then went back to signing some autos from a pile on his desk


Johnathan Del Arco- again he had no queue . He was so quiet that his PA was taking a selfie with him. Again he didn’t want to engage was rushed and moved me along.


Sunday no going well for my meets so far
My next and final auto Armin shimmerman was a nice quick chat about his time on buffy and the awesome costume photo from the day before .


Said a quick hi to his wife kitty swink and we discussed her plans for her birthday this week . Had a quick selfie and off went for my photo shoots .


Sharzad Latif: was only a quick meet but he was friendly and I had to tell him of the love for Clem Fandango


Casey Biggs costume shoot ( damar) was very cool to see him in the outfit . Though the skin was a lot browner then I imagined . Always so much greyer on screen.


Jason issacs : was quick but friendly and he joked about red shirt tshirt


And after hours and hours of waiting I had my Robert oreily Gowron photo shoot - he was really enjoying it . Shouting orders and posing with the fans. He looked great but again the make up wasn’t quite right- he looked s good Klingon but didn’t look like gowron


I was quite excited as the next generation bridge did look good . Not £15 good but good .
Would have been good to have a group option and not pay per person.


I managed to catch the discovery Klingon free talk - was informative about how the costumes work and how they learn the language .


The auto and photo prices were generally reasonable . Few were a bit higher then prob should have been but on average they weren’t bad .


Many guests were doing free selfies which was a nice add on and a nice incentive to meet the guests.


I am actually happy with all my photo shoots which is quite rare so that’s a bonus . The lines did need a bit more organisation but mostly the limited staff did really well.


It was noticeable that there wasn’t as many staff as usual at an event like this . But they mostly all did good.


Not a fan of paid talks at events and unless you were getting photos and autos there was nothing else to do .


The Selfie points were let down and no real though involved.


Overall if the guests were there next year that I needed and at same costs - I would attend again.


It was fun to see friends and release my inner Trekkie