How did you break into comics? What was your first published piece
and did it come out as you hoped?

I got really lucky on this regard, pretty much the first time I sent my portfolio out it landed in Chris Ryall's inbox at IDW, and boom he hired me for Spotlight Hot Rod, hmmm at the time I was happy with it. But looking back I
personally feel you can see how new to the art form I was, unlike a lot of guys I didn't do much colouring, drawing or painting until about 9 months before I broke into the industry.

Has there been any piece of work that you have seen published that you
now wish you had done differently?

Oh without a doubt, Spotlight Grimlock, the cover to Spotlight Mirage, Spotlight double-dealer. I was never happy with how these turned out. TBH I’m my own harshest naysayer.

What made you take up colouring aspect of comics? And do you prefer paints/pens or digital?

Originally out of boredom tbh, then I kinda felt it clicked with me and I started taking it really seriously. Hmmm I like to mix media's, is that a copout answer? See the big probe here is that when I’m doing pens and paints I usually working a loser style so it's more energetic and vibrant where as I can really take my time digitally

How did you develop your interest in Comics? Why Comics and not animation?

Actually animation came first for me, my Major at University was Digital Animation so that was my initial career path, I really got into comics heavily at about 17 just from picking them up and using them as reference points
for body language for my course. I ended up colouring in my final year, again to help with my degree and then was at IDW two weeks after I handed in my last project.

Is there any character that you prefer to draw? or a character you just don’t get on with?

Hmmmmm at cons I mainly get asked to draw four characters more than any other, Grimlock, Joker, Harley Quinn and Batman. Tbh I LOVE drawing the Joker, each time I like to mix it up with different takes on the look of him.
Hmmmmm not getting along with, probably Spider-Man, the webs are a pain haha.

Who has been your biggest influence in comics? Is there a specific style that you have tried to emulate?

TBH not really, I mean there are artists I absolutely adore like Jo Chen, Joana Lafuente, Priscilla Tramontano, Christina strain and Wain Bewedo. Those guys blow my mind. But I’d rather take my own approach, I like to change
styles quite often so I’m constantly trying to learn better approaches to things, but never to be someone else

It has been said that IDW is different to most publishers as they seem to work with more  less well names in the industry and  have been known to give a lot of artists and writers their big breaks, how was your experience with them?

My experience with IDW has been nothing but great, Chris Ryall and Denton J Tipton I’d do anything for, great guys, all the artists are amazing to work with and chat to.

You have become a regular at comic conventions what is it that brings you back each time? Have you been to any American events and if so how do they compare? Which do you prefer?

No I’ve never been to any American events as of yet but I’ve been invited and encouraged to go to SDCC and Botcon more than once. The only thing that stops me is scheduling tbh. I genuinely love doing cons, meeting new
people, doing sketches, I especially loooove doing charactures of people, posing for pics the whole shebang, it's really nice to know there are people out there who care about the work I’ve done. It'd make me tear up if I weren't such a heartless SOB.

At a convention you have been known to draw anything that is requested what is your weirdest request and how did it turn out?

I've lived to regret that "will draw anything sign" I’ve had a lot of not PG-13 request, but tbh it's got a bit old hat now, I’m kinda unshockable with the requests, though I relish doing obscure characters.

Any advice or tips for anyone trying to break into the comic industry?

Don't do it to make money, do it cause you love it, don't expect to break in quickly and learn to take rejection. Also learn to be well mannered and professional, if you’re not prepared to put the job first and dedicate the time and effort to it. My advice is don't bother at all then.

Who would you most like to work with in the future?

I've found through practicing pieces that my colours really complement  Jim Cheung, Ed McGuinness, Olivier Coipel, Ryan Ottley. Though I’d really love to work with Guido Guidi and Nick Roche again, I love his lines and his ever changing style.

What are you working on right now?

I'm working on some interesting projects for Playstation at present; I’ve worked primarily in the games industry for the last four years on over 30 different titles at last count. I've also got some comic stuff on the horizon
but nothing I can talk about at this time. You’ll be seeing a lot more of me this year I can assure you.

Lots of Comic artists and writers say they don't read many comics anymore due to
work commitments, and that due to being involved in the creative process they
feel that Comics have lost their 'Magic'. That said, are you a comic reader, and
if so, what is on your pull list?

I'm a bit out of the loop at present, but I’m a huge fan of Fraction, Bruebaker, Garth Ennis, James Roberts, Warren Ellis and Brian K Vaughn. I tend to impulse buy new titles to keep my interests fresh, but I did until recently
have a huge collection of over 600 graphic novels.

And Finally if you were to create your own transformer- What would they  A) transform into B) which faction would it be?

Hmmm maybe a TV screen, be a self indulgent lil jerk of a bot who was too lazy to fight so didn't sign up with either faction :D
Liam is at most of the upcoming shows for MCM and Showmasters and is a permemant fixture at the yearly Auto Assembly convention. If you have some money to spare pop on by his table, he has a variaty of amazing prints from a diverse character base-from Transformers to the Joker and a great deadpool Man-Thing team up.
His sketches are great value for money and Liam is never one to shy away from just going for it and making each picture as individual as the one before. He is not a one trick pony when comes to the same charcaters time after time.
If you are interested in commisons but cant make to an event or simply cant wait that long contact him o the links at the botom of the page and he will be more then happy to accomidate your needs.
The best thing about having known Liam and seeing him at many events over the years i have really been able to see his art style change and develop to such a high standard. He is one of the only artists at most events with a full List, full queue as soon as he gets to his table. He has an ever growing fanbase and he will be moving on to big things in the not to distant future 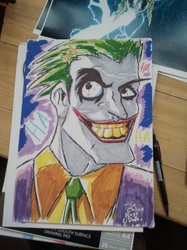 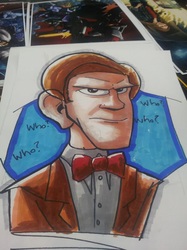 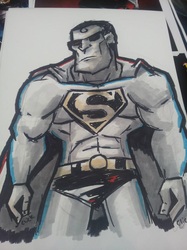 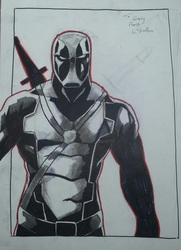 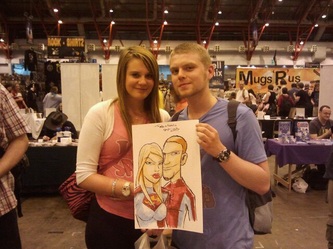 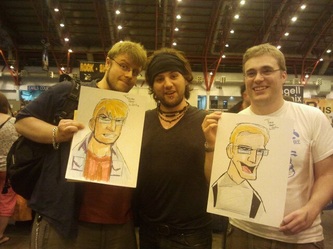 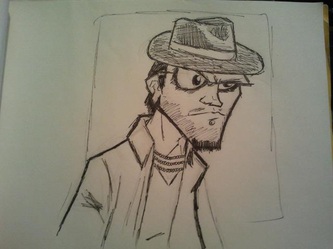 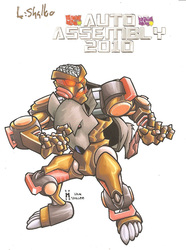 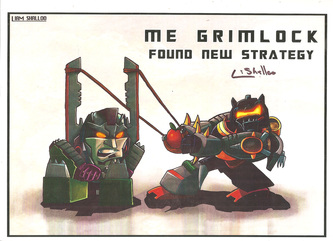 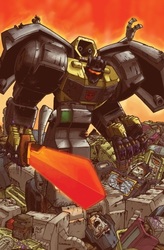 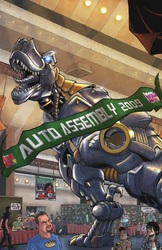 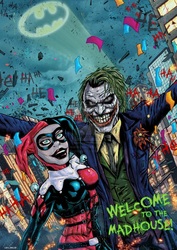 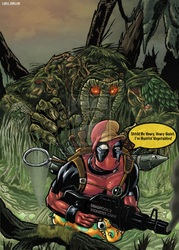