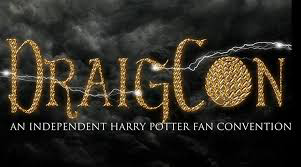 
I will review the event as honestly as possible , I was asked to MC on the the halls so I didn’t see everything over the weekend and as crew my experiences will have differed over others .
But I will as always be open and honest about what was good and bad.


The venue
To me this was one of the negatives .. but also wasn’t that bad .. it’s a strange one .


The printworks if you’re not aware is a complex of restaurants, bars and a cinema . The event it’s self used some of these to Host the activities . I’ll try to review each as best I can


The main concourse - this became diagcon alley . With traders and stalls kitted out and the Wesley’s car as the centre piece .
It wasn’t over filled so there was room to move comfortably and so you could see all the Harry Potter merchandise on sale.
There was even a dragon you could stroke and play with . He was a cutie.


Tiger tiger - this club was the main autograph venue .
It was split into 4 sections . 2 held guests whilst the 3rd was the photo studio and a couple of guests and the 4th was the karaoke studio . Sadly I didn’t manage to get into there to sing along ... i know , heartbreaking isn’t it .


The stars were on the 1st floor and although they seems happy sitting in the booths relaxed and chilling out with the fans as they came and sat with them .
It was nice to have that more intimate meet with the guests . But it was more time consuming and the lines did form fast and there were some long waits. Normal con attendees wouldn’t really think it was that bad but many of the attendees weren’t regulars so that was one to the negatives that people did keep mentioning.


The vue cinema was the venue I was meant to be working - to which I had spent all week preparing for my interviews . But at 11:30 on Friday night it all changed and I was moved to the lazy lizard venue - so I never managed to make it to this venue but I heard the talks were ok .. not as good as could have been ;)


Waxy O’Connor’s -this was where a few of the guests were situated . I only managed to get in here once but it was downstairs and not the easiest to navigate.


This was an older building, with a very hogworts feel. This held a couple of the smaller talks, a couple of guests and a wizard who was telling tales for the children .


Finally there was my venue . The lazy lizard . This was an underground club to which my stage / booth was housed .


It wasn’t the best stage to have as it wasn’t raised very much and the DJ booth blocked off a good section of the stage so we had to sit on the corner . The lighting was hit and miss and was hard to see the people asking the questions , sadly we also had only 1 mic which was wired so was a lot of passing back and forth. Which did lead to some delays.


I will be the first to admit that I do think I wasn’t at my best this weekend. I couldn’t quiet get my mojo flowing . Trying to balance the audience as there was a lot of children there . So I was on my best behaviour as we all know my humour can be a bit edgy at times. Plus my lack of Harry Potter knowledge and the last minute change to the guests did knock my confidence a bit. I was lucky they the guests I did have were so great that they didn’t need me as much to help guide the talks .


I was also sharing the room with the magical potions team who when I was off stage were doing science experiments to entertain . These went down very well with all the audience .


James Payton - Frank longbottom .
An absolute gentleman. He really gets what it means to be at an event . He was fun , friendly and gave good stories. He is a guest I would def recommend meeting if you get the chance in the future .


Simon fisher Becker - annoyingly this talk was cancelled due to the venue not being able to accommodate his disability. He was the one guest I knew and could have held my own on stage with .


Sunday he was replaced with Katie Healy who was an extra in the first few films as one of
The children. She controlled the stage and had a huge presence. Very sweet


Rohan Gotobed- young Sirius Black
For young actor he had a lot of energy and warmth to share. He is a true fan and knows his stuff.


The next guest was meant to be paul warren but due to some delays in the morning he was running behind and the talk was postponed. This would have been fine but due to one recurring issue I found with the event -communication. As my venue was not near the main one we got little to know updates until I had a full hall and was hard to let them down.
Sadly the same happened on
Sunday as no one was made aware that he was a Saturday only guest.


Walles Hamomde- Auror ( fantastic beasts)
This was the interview I was most nervous for as I have not seen the film. But he turned out to be one of my fav guests. Fun and open and full of energy . He was nervous but you wouldn’t have known. He was a joy to meet.


Michael Henbury - goblin
I adore this man. He had so many stories from star wars, willow, labyrinth and Harry Potter. He has a wicked sense of humour and was so warm and friendly .


Ashley mistake Saturday - for those who don’t know Micheal he is a little person who uses a mobility scooter due to disability.As he was making many great jokes i asked him if he ever wanted to do stand up. The audience realised before I did and Michael just looked at me
And laughed.


Ashley mistake Sunday - when asking a question about who Micheal was
Inspired by for acting , I asked was there any actors that he looked up to. His reply was most of them and again they all laughed until I realised my mistake.


He was an absolute delight.


My final talk was to be with Peter Roy - wizard
But Saturday the stage was busy being used buy paul warren having be rescheduled and then Sunday as it was the last thing of the day there were few attendees so we turned it into a meet and greet instead. Which he did prefer.


Other guests that I met


Chris rankin- wow he was so busy. Non stop
All weekend . Always nice to meet


Tolga Safer nice and friendly. We quickly discussed how his character didn’t have a name other then Krum’s aid so we have named him Aiden.


Nick Moran - been a fan of his for a long time. So down to earth , so funny and loved taking the piss out of me. Really impressed


Brian muir - legendary sfx designer . Was v brief but I am in awe of his work.


The price of autos were between £5-£15 and all photos were £10 ( you could
Share with up to 4 people per
Pic) so for an event aimed for the family it was a very good bargain all around . 99% of the guests were doing free selfies as well.


Ticket holders got 2 free autos that they could get from a selection of guests.


All in all was a real fan and family friendly event . Which you honestly don’t hear much of anymore .


It was also a shame that there wasn’t many staff or volunteers around to help. I think this event needs a lot more visible staff esp with the layout as did hear a lot of people asking each other questions to resolve things


It’s not an event I would chose to attend as I’m
Not a potter fan but I would say if you are it is one to watch.