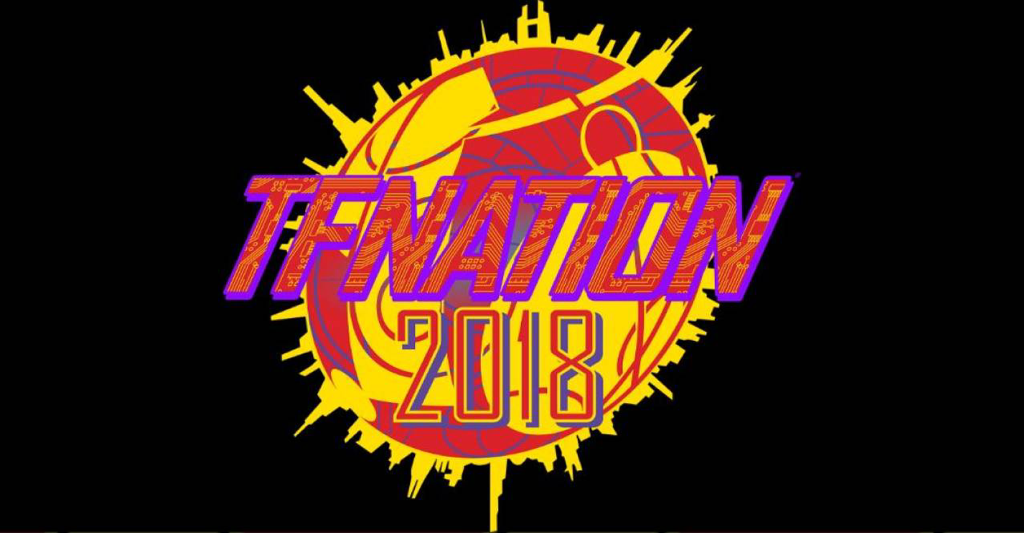 
TFnation is the UKs transformer themed event held at the Hilton Birmingham each year. This is their 3rd year now after picking up the seeds of the event from the previous Auto Assembly.


It is a weekend event Friday- Sunday and consists of signings , panels, cosplay contest and a script reading session. The guest lists have consisted of voice actors and comic artists/writers and this year we were lucky to also have in attendance the singer of the definitive transformers soundtrack Stan Bush.
Plus to make the event even more fun he was playing a concert on Saturday night .


It is quiet a varied level of guests . This event is slightly different to most events. It’s not quiet a weekend event it’s not quiet a signing event. The guests are at the desk all day long and sign and do selfies for free ( there are some charges if buying items from their tables ) the comic artists do charge for sketches.


I arrived late on Friday and missed most of the evening activities but I heard DC Douglas -who also plays the main character in the resident evil games - had an adult themed panel which did shock some members of the audience but sounded very funny. The theme seemed to be about sexual fan fiction he has received over the years .


The guests were hanging out in the bar area and generally mingling with the attendees . Which is always nice to see. I managed to have a nice chat with Aaron Archer about some of the toys he designed .
It’s a very different Friday night as I’m used to there being parties but it was mainly people sitting around talking and playing with new figures that they had purchased.


Saturday morning the doors opened to a huge queue . The first minutes of door opening is when the crazy happens . Attendees rushing in to see the stalls . Rushing to get the newest toys . They are like locusts to crops . Shelves being emptied in seconds. Luckily I wasn’t after too much this year .


I wandered around the stalls picked out the items I wanted. The stalls are always the same company’s -specialising in ... transformers .. I know I’m surprised as much as you guys. The stalls are the big draw for most of the attendees.


I then started to meet the guests, over the years I have met many of the comics guests many times so i didn’t meet all the guests that were there .


Andre - he only had a small part in the movie and in an episode of the cartoon. So I wasn’t overly excited to meet him. But then I spoke to him. He is really friendly and has a lot of stories. From his work on American dad, family guy to his roles in the movies . He also likes to take a selfie himself so we did have to have a selfie off - my arm is always the longer and always the winner


Daniel - my first thought was wow he’s a giant of a man. It was his first event and he was a bit nervous and going out of his way to make those that met him feel welcome . He liked taking about transformers but when we spoke about his Star Trek roles he has so much more to give . From the hours in make up for his Klingon part on enterprise to getting a telling off by Wesley crusher on next generation . He was genuinely a highlight to meet . We spoke about his role in one of my fav films - Ed Wood. About working with Depp and being in awe or Martin Landaus performance and how lovely he was to work with.


DC Douglas - I don’t play resident evil, I don’t watch rescue bots so it was a brief meet . He was nice and made comments about his time on rescue bots to which I politely lied and pretended I knew what he was taking about . But was a nice meet :)


I caught up with the usual regulars - JP, James , Kei and Jack . Got the recent comics that has piled up since last I saw them signed and we chatted about how sad it was that the IDW universe was ending .


Went to speak to Nick And here his apologies on why my sketch still wasn’t done... it’s only been 4 years now . Here’s hoping for it to appear year . We used to joke that the world would end before I got my sketch .. but now the whole comic universe he works with is ending instead .


My last comic guest to meet was writer Mairghread we had a nice chat about her creation of windblade and about the artists she worked with . Why she chose them and how it was random that it became a full female team. She was nice and was great to hear about the process to pick the artists and the style she looked for etc.


The final guest I met .. the guest of honour. One of my favourite singers. Who’s songs from the soundtrack have been in my whole life and my go to songs when ever I feel bad. These songs are deeply personal to me so getting to meet him and discuss those was a huge thing for me. I don’t get star struck , I don’t get nervous when meeting guests but this time I was . I fangirled hard . But he was nice . Quiet and a bit reserved but polite and took the time to sign the items and get up and take a photo.


Although the event sells a lot most of the attendees only go for the toys. So the guests are usually quiet and you can have more time with them.


So I then planned to watch the panels for the day .. usually there are panels every hour but this year there wasn’t . Each guest only had 1 panel over the whole weekend. So even tho they had 2 rooms for panels . They only had a handful of panels per day.


So unless you were buying toys or meeting the guests . There wasn’t much to do . Which was a big downside to this years event.


The other downside about the main stage . It is in the main hall but surrounded by the guests tables and the stalls . So it can get very noisy at times .


The talks I did see were good with guests being open and fun .


The other room of the event is where they have Artist alley and each year they have displays of different themes this year it was custom figures and third party prototypes. Along with a Stan Bush collection of albums and memorabilia .


The evening entertainment consisted of a cosplay competition. There were 2 category’s human version of transformers and the regular mechanical versions


The costumes were amazing so much talent on show. With lights and some parts actually able to transform . Tho the one downside .. they can’t move very well in them so easy to steal the winners trophies and run away .


Usually the next part is a script reading with many of the guests but due to the concert being held that evening they did a shorter version with just the voice actors . Each bringing the fun and embracing the humour of the script .


Next came the moment we had all been waiting for ... the concert of Stan Bush !!! The room was packed and the vibe was amazing . Excitement and anticipation. He played 8 of his songs that most people kind of knew and enjoyed but then he played the two transformers songs and the room exploded . Singing and dancing. It was amazing . Such an emotional and fun time. He was called back for an encore twice .


Was lucky to have a chat in the bar with the band after .


Seeing him play those songs is a huge life dream come true really a great evening .


Day 2 - I have very little to do and there was only 1 panel at 11 and then nothing until stans panel at 2pm . I loitered around as this was the panel I was waiting for ....sad to say it wasn’t that engaging . The man can sing but he isn’t the most engaging interview .


Overall the event is good and has an old school vibe . Fan friendly and also not about making money.


Do you need a weekend ticket ? Unless you want to see the evening activities - no as you can get it all done in a day easily.


It’s nice and relaxed and unless you’re going for a certain toy there is no pressure at all over the weekend. Which is nice .